1
Matthias had his hand full of waves and lines; a big and lashed up ocean, which made him scared, because every moment it was able to break over him, Matthias, as also over his own banks and beaches, crashing all over it. Matthias’ hand was strong and he had it under control: it is the one and beloved hand Rex which kept him the world at a beautiful and protecting bay.

This didn’t go at all without saying.

Often his hand jumped, hopped and wagged too willingly in weird airs, forgot about Mathias, his owner, his hand and holding-hands-holder, when it suddenly and unwantedly became aware of an inadvertent confrontation with another hand.

And already everything had started.

Matthias’ hand Rex was blessed with a good portion of distrust, and even though it loved to hand out too willingly, it liked to extend itself towards other hands or simply loved moving and motioning the air, always kept this good portion of disgust under his hat; a portion which was so good that he never would have shared it with anybody else.

Though in case of a violent confrontation with another strong and claiming hand, it reacted with great presence of mind, closed itself around the other hand, fully confident of its victory and a strong fist.

Altogether one could say, his hand was fun-loving, liked to jump around in woods and parks and sometimes it bit a little bit around – one has to overlook this: lust for life has many colours and is rich in facings.

Conclusion: first the hand obeys, afterwards it attacks and snaps at the face of, if necessary, every other hand which stretches itself towards it: rapidly and dead of target.
Every respective hand- or holding-hands-holder has power on it, on Rex, the King, as his owner.

He gives it to eat, he’s training it, he drills it, he rolls it to and fro, knocking the stuffing out of it, so he can be sure that in the moment when another hand stretches towards him, his hand will snap at. Will take this other hand. First in a friendly way, but equally in a distant way.

Does one hand holds another hand too much time in his hand, take care!
It is a question of territorial claims, distributions of soil and spirit.

2
That day Matthias didn’t go at all at my hand, he couldn’t be stopped. As near as I drew Rex at his hand, it didn’t help: he disdained it, turned off and away, disdainfully, vile, he strained at the leash, squeezed my blood off the wrist. With his legs, which dangled from his body like sausages. Everything was unclear. Matthias wasn’t mine, but he gave me his paw, as if I was his permanent companion. He belonged to the neighbour-woman, who loved him and had brought him up, who held him tight with her wrist, and, by the way, held him so strongly that the palms of her hand bended more and more and her life changed constantly. “Wherefore this restlessness?” asked me the friend of the neighbour-woman in the evening, giving me his Rex-hand together with a secret boot to Matthias, so that his Rex and my Rex began to smile – we knew what it was all about – the neighbor-man and I.

Add to that the neighbor-man loved crumpling other hands, in order to bite them to pieces like soft bones. He was a warhorse. Together with his Rex-hand, bearing it always very close to him, mostly it dangled from its wrist, groggily and laxly, swinging in the air, just so as if Matthias always would be ready to make an enormous jump upon everybody: “You have to hold the dog very close at hand”. The authorized dog-expert had cleared it up: The Rex-hand always has to be held very close to the dog, in order to avoid that he suddenly jumps off and away, while drawing you backwards at your own Rex-hand behind, so that possibly your own hand will fall off from you, down on the ground. No, not really off from you, naturally, but the pressure of the leach could get so awesome, that it could block the blood supply, so that your Rex-hand really will die a while off and away. Of course, Matthias instinctively knew what the neighbor-man was plotting about him and took my hand or the neighbor-mans hand in his hand and jumped suddenly up and got off and away, so that the neighbour-woman fell down on her face. “So it won’t work” said the neighbor-man, terrified, drew Rex at first at his ears and then caressed his belly with his Rex-hand near by himself, in order to calm him down. The neighbour-woman still lay lifeless and dumb on the floor, on her face, her hands near by her eyes: “The danger is too big!” shouted suddenly someone, we shouted, we, who we all of us were standing in the lift, like cattle, penned up. After that primarily nobody said nothing; we all, paralyzed by the heavy-storm swelling wave-mountains of the more and more extending fear, let us rock in the air and move us to and fro. Normally the neighbor-man knew what to do in extreme situations. Hence he drew Matthias with his Rex-hand again very close and near by himself, maintaining both far away of the neighbour-woman, lying on the floor, deadlike: she was the real dog-owner. “Could I fold up the dog like my hand, everything would be a piece of cake. Easier, simpler.” He breathed one time and deeply. For a short moment and so deeply, that Matthias began to howl out loud, jumped on the neighbour-woman-hand and cut it off with a quick snap. Simply it dropped off and away from him. Drizzling rain sprayed his blood onto the Rex-hand, now lying on the ground, as well as onto Matthias himself, the neighbour-woman and us, the rest of the lift-visitors.

Matthias had bit off the neighbor-mans Rex-hand. Blood sprayed in a rainy way upon the heads, the bodies, several muddy puppies and upon all new coming hands, which rapidly scratched their owners at their particular heads. Everything happened more than fast; besides, everybody had to carry his own legs, which had found a separate place near by Matthias’ pannier. He never had loved his pannier; the neighbour-woman, still lying on the floor, deadlike, had bought it one year ago, drawing Matthias with this pannier like her own Rex-hand behind: this had been an unworthy drama, then, when the pannier turned over at the hand of the neighbour-woman in the lift, offhandedly.

“And what will we do now with Matthias or rather with the bitten off and gotten homeless Rex-hand of the neighbor-man?” Asked some anonymous lift-visitor without receiving an answer.

Fortunately now the neighbour-woman, the real owner of the dog, stood up and from the floor. Everything pointed to the fact that she hadn’t suffered great damages. For a moment she looked at me, twisted my wrist and promised to solve every problem immediately.

Then the neighbor-man nervously drew his trousers up, with his only left Rex-hand being left him and let it fall down, immediately. Naturally Matthias snapped at, no doubt. “This dog is as dangerous as my own hand!” He shouted excitedly and looked at the neighbour-woman, reproachful: “Every moment she, my hand, can knock out in a big way, like a divining-rod and after a while nobody never will get to know which little hour had struck this poor dog. I never stroke him, neither my Rex-hand, because my both hands always sleep willingly in my trouser-pockets. So I cannot having done this. Besides, I’m missing one hand, don’t know where I got lost of it”, whereon the neighbour-woman denudes her arm, shows a tattoo, shows Matthias, smiling and rocking softly in her arms. Then Matthias began to bark affirmatively, so that everybody turned around towards Matthias, towards the wall in front where Matthias pissed on new drizzling rain.

“Those pigs”, cleared the concierge his throat, piping up and searching a clean sponge to wipe up the blood from Matthias and the Rex-hand of the neighbor-man. “Where is my hand?” All of us heard some weak voice; it had got weak and weaker, after Matthias had snapped him off his Rex-hand, which now lay deadlike on the floor like the neighbour-woman before: Matthias licked him up from top to bottom. She pointed a finger at Matthias: “There, there, its lying, there is lying Rex, your right hand! Its moving and licking you the tongue, it’s getting slippy and silky!” All of us cried at the same time. Then we began to study the Rex-hand of the neighbor-man:
it moved independently in front of Matthias to and fro.

It had been Rex, who had crowned Matthias and driven over the floor, wagging his tail to and fro as if he pretended to wipe the floor off. Clean? “Sit!” cried the neighbour-woman, took his hand again in her hand and buckled it on his wrist. “Such a hand I’ve never seen, it dances, jumps, barks and licks and is always on duty. Incredible!” Then said the neighbor-man: “Thats what I said: such a dog you must handle with both hands, put him strongly at the upper part of the body, then tension and then simply let him go.” Hereupon the Rex-hand jumped into the middle of the sentence of the neighbor-man, who said to the Rex-hand: “You cannot press the button on which is written “5” if you want to go down to the first floor.” Everybody agreed, only the hand still didn’t do what it had to do. Nevertheless it seized Matthias by the throat, clinched him the wrist and the neck and strangled him. Meanwhile blood streamed out of the neighbor-mans wrist, while his Rex-hand played with the lift-buttons. The neighbour-woman insisted somebody must call a doctor, because, who knows, where the Rex-hand had loitered and lolled about before; of course she wasn’t interested, because actually this was not to her, but it was to the dog Matthias, because, after all, it was important to know what and whom he was biting all day long.

8
Moral: No hand is free. Always it’s under stress and drill. Therefore it has to be trained every day (in order not to loose courage). Trained by the pen who guides it, trained by the words which it has to execute and to take out for a walk, in circles, in parks and in straight and oblique strokes of the brush. As if it would have been made for nothing else than that. The hand exists also for writing, for closing itself around a pen, yes, also it exists for peeling onions. Always wants to move, being quiet is not its case, it needs movement and it needs much movement. Always wants to do something. Wether it is wild in the garden and nuzzles in the earth or snatches off other hands. Never it is content. This hand, which name is Rex and which is a king, bites, snaps, maintains closed like steel, doesn’t give up, doesn’t let go. Why does it write, why does it bite? It has got crazy, the hand named Rex has got crazy, snaps at everything which moves, snaps at every word. Overall they are flying around, biting themselves through the air like a dog, snapping at everything which exists, being mad after everything, yes, having the words forever in their hand. So for example, if one hand is called “Matthias”, we naturally think of Matthias, a bigger one, a smaller one, a more Rex one, a less Rex one, but always think and see our old picture, then, when the hand shuts with a snap and suddenly and simply is called Matthias.
(Eigene Übersetzung) 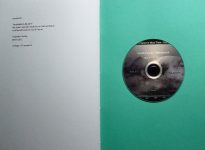 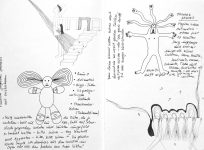 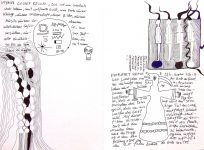 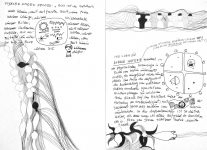 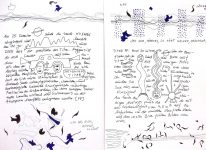 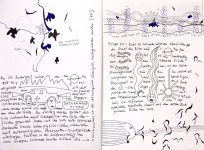 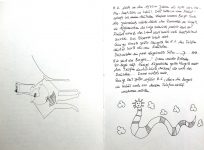 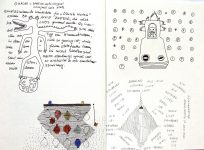 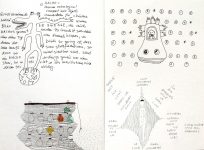 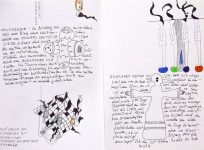 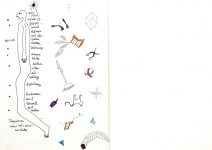 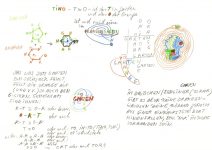 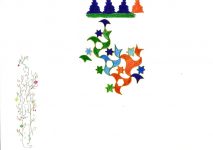 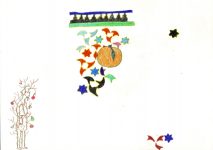 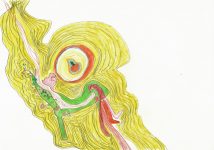 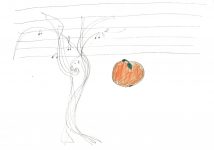